Open all hours and open each day,
The Miracle Factory beavers away.
The Miracle Workers all wear special clothes
And speak their own language that no one else knows
With monitors, pumps and needles and tubes
And other cool gizmos that only they use,
Conduct arcane rituals from far distant lands
Attended by quizzing and laying-on of hands.

The Miracle Seekers, reluctant, attend
The Miracle Factory and hope they can mend
All kinds of ailments and injuries too,
In full expectation that they’ll all pull through.
But sadly, though, sometimes this isn’t the case,
And this is a thing that we’ll all have to face.
Still, in denial, we’d much rather stay –
In awe of the Factory that beavers away.

The import of this meeting overrated cannot be.
I am a little nervous but that’s just ‘tween you and me!
For suitable attire, my whole wardrobe I have scoured.
My new bowtie analysis has left me quite empowered!

I stride into the meeting room, exuding style and poise,
My large piccolo latte shows I’m not one of the boys!
I open up my MacBook, shine the Apple in their eyes,
Confident they’ll all be fooled by my complete disguise!

I funnel feedback down the line, cascading here and there,
The conversation’s now offline – they haven’t got a prayer!
My (Power)Point is made so well they dare not ask a question –
But if they did, I’d beat them down with my raw condescension!

They show their slides, I smile and nod and grant them my approval –
But all the while, I’m plotting my new Boss’ sad removal!
Today, the Emperor’s brand new clothes are still the height of fashion –
It’s great to see them worn so well, with pride and so much passion!

The Sun, it seemed, had moved in right next door –

Never had such heat been felt.

Covered in sweat from my head to my toe,

I was sure I was ready to melt.

The aircon was going full tilt on the wall,

Its innards were glowing bright red,

The fan was ready to lift off the roof

As I slumped in a pool on the bed.

The air was thicker than treacle, it seemed,

And I hung ‘tween the next world and this.

I must have dozed off ‘cos the next thing I knew,

I was floating ‘midst icebergs in bliss.

A seal bubbled by with a gleam in his eye,

I nodded assent to this maritime gent

And then he was gone with a wink.

It started to rain on my feverish brain –

In the shower, I then found myself.

The water was cold and I felt very old

As I reached for the towel on the shelf.

I looked out at the sky while I rubbed myself dry,

And prayed for a breeze or some rain.

The aching blue sky looked me right in the eye,

It was then that I knew, despite all I could do,

That my new next-door neighbour would win.

So, as I got dressed, while he set in the west,

I showered in sweat with a grin.

Sydney had a very hot and humid summer this year!

It’s the Festering Season all over again:

A most joyous time for all women and men.

Passed a whole year has for old wounds to mend

And breed the good will that such healing attends.

But old wounds are good wounds and this time of year

Is perfect for festering with wine and with beer.

A thought may be thought but it’s best not unleashed

Unless thought right through, lest the tension’s increased.

Still, why spoil the fireworks of family and friends –

So, sit back, enjoy this year’s floor-show and dinner.

Just stay on the sidelines and you’ll be a winner.

Once my life was so tranquilo
With my hundred sweet bambinos,
Now I’m cryin’ all the time
Because there’s only ninety-nine!
The hand of God (or so it seemed)
Smacked my son and now he’s creamed!

How I tried that hand to veto!
Oh! That heartless huge bandito!
Pay, he will, for murderous deeds:
It’s he I’ll see for my next feed!
But to him I’m incognito
So I’ll leave one huge graffito!

Then he’ll rue his evil crime –
Justice truly is quite blind!
Though my heart will not be healed,
This criminal won’t be concealed!
My banner on his arm unfurled:
“One Less Mosquito in the World!”

A new preschool recently opened across the road from me. Thinking about enrolling my youngest child, I asked if I could sit in for a morning to see if I would be comfortable leaving my son there. “Sure”, came the ready reply from the professional-looking Principal.

Over the next hour or so, the place filled up quickly with bright-eyed two- to five-year-olds. The first formal activity was Show and Tell. This will be illuminating, thought I.

Maria was the first to stand. “I brought in a set of Daddy’s old knuckles”, she said, proudly displaying a worn set of knuckle-dusters.

“Aren’t they illegal?” I murmured to the teacher.

Next was Alphonse. I thought my surprise for the day had passed. I was wrong. Three-year-old Alphonse whipped out a hunting knife, beaming from ear to ear.

“No. It’s ok in this State. He’s hardly likely to use it on anyone, though, is he?” she countered.

I gave her a very doubtful look which she happily ignored.

Miriam now took centre stage with her Grandfather’s Luger which, she proudly informed us, he had taken from a dead German officer during the war.

I cautiously rose to my feet.

“Don’t worry”, said the teacher, laying a comforting hand on my arm. “It’s so old I doubt it even works. In any case, guns don’t kill, people do. And Miriam doesn’t look like a killer, does she?”

Miriam gave me a disarming smile.

“That’s nothing,” boomed little Joshua, as he staggered to the front, desperately trying to carry an M-16 assault rifle.

The teacher could see where I was heading and cut me off. “They are perfectly legal in this State!” she pronounced. “And we do insist on the standard magazines rather than the oversize ones. Anyway, guns don’t…”

For some reason, I was not feeling particularly comfortable at the thought of my three-year-old immersed in such a culture.

I lay awake that night trying to make sense of it all. Suddenly, it was all crystal clear: fists don’t punch – people do. Knives don’t stab – people do. Guns don’t kill – people do. Nuclear weapons don’t destroy the planet for centuries to come – people do. The solution is simple – ban people!

Not me, of course, I’m perfectly rational. If you disagree with that, then you clearly have a problem. So, I’m afraid, you will be banned.

I have now decided to branch into short stories as well as my poetry. This post is my first foray into that style. I hope you enjoy it. 🙂

Two Cats and a Tom

The waitress led me to a table by the window in the bar on the top floor of my luxury hotel, overlooking Hong Kong’s magnificent harbour. The constellation of coloured lights winked as I sat and ordered a drink. As luck would have it, at the next table sat two Cats and a Tom.

I wondered what language he was speaking.

“He’s had his snout in the trough for years”, replied Cat 1.

Ahh! Here was a language I understood. The Cats were fashionably dressed with tasteful jewellery and makeup while the Tom was casually dressed with his hair smothered in “product”. I doubt that it could have moved even if the super-typhoon off the coast had appeared in the bar. While the trio sat still, their tails whipped back and forth (as is the way with cats) to indicate their minds were working overtime.

Cat 2 interrupted her grooming to mumble something, at which the others nodded sagely as if something profound had just been said.

In the far corner of the bar, the pianist began playing and the singer began yowling off key. There was no doubt I was tired but I began to wonder if I’d walked into some private bar for felines. My fears were confirmed as the conversation continued.

“He had no idea when he worked on the line,” (this was not a reference to the Internet) continued Cat 1. “So he moved into management as soon as he could.”

My eyes had now adjusted to the half-light and I could make out the painted claws gleaming and clearly ready for action.

Cat 2 now made another contribution, “I was there when a passenger had a heart attack and John (not his real name) went into meltdown. I had to take over while he pretended to direct the action. He got an Excel award and I got nothing! Hello! I was there too!”

“Would you care for another champagne?”, asked the Tom.

A whip of the Tom’s lustrous tail was sufficient to bring the waiter. “Three more champagnes please,” said the Tom. He continued, “We used to do shuttles to New York. They were sooo tiring.”

I must have missed the connection.

Cat 2 replied, “Just about everyone from my initial course has got an Excel award but I haven’t yet. I don’t understand why.”

“But the most tiring of all,” moaned the Tom to no one in particular, “were the Mumbai shuttles. They were shockers.”

Cat 1 now entered her own orbit. “I can’t wait to get back to Tokyo. Being downtown is so much better than being out near the airport.”

“I have leeerrrrved yoooouuuu!” droned the singer. Another patron burst into enraptured applause. I was uncertain as to whether he had enjoyed the song or was simply relieved it had finished.

As I quickly drained my glass, it occurred to me that I was glad that the motivation for those who care for me inflight had so much to do with my wellbeing. Cats might fly! Another day in paradise. 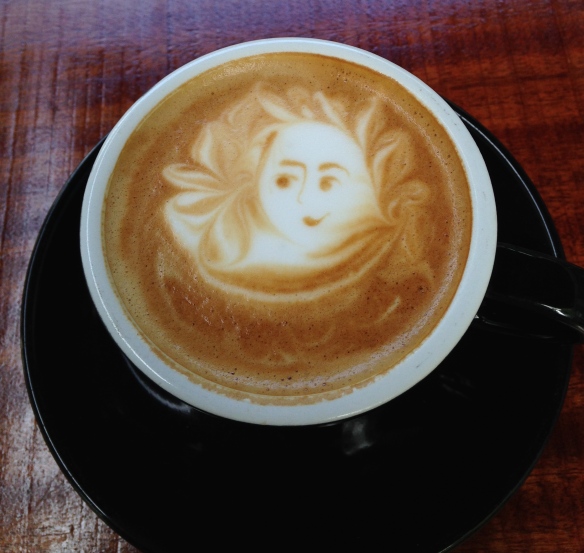 This humble little Bean, untouched by human hands,
Growing unmolested in the soil of distant lands.
Valued more than dollars, pounds and even life itself,
It doesn’t linger long upon the tree or café shelf.

Its devotees may contemplate the meaning of the Bean
In sample-selling salons here and there and in between.
A life spent in such contemplation, surely, is well spent.
Ten dollars for a cup of Joe? Yep! It’s worth every cent!

Pulling, pressing, percolating – don’t care how it’s done!
I need a double shot right now – I’ll take it on the run!
Who cares about the price of oil or gold or other things?
What matters is the warming buzz and joy that coffee brings!

I am a tradie-person, as cool as cool can be:
My plumber’s crack is round the back, just where a crack should be.
I jump into my tradie-ute, ‘cause bigger’s so much better,
(Despite the freezing cold outside, I’d never wear a sweater!)
Consult my phone and, all alone, reschedule everything.
I’m breaking all my promises. See? That’s the tradie-thing.

I’m racing down the highway now, ignoring all the signs,
‘Cause racing’s what we tradies do yet somehow get no fines.
“Yes, I can fix all that for you, the price is (quite outrageous)”.
Enthusiasm level now, for cash, is quite contagious!
“I’ll see you maybe late next week” and lucky you will be.
You’d better do the job yourself – I’ll tell you that for free!

Insanity runs in my family,

The author of constant calamity.

He sped to my sister

And tenderly kissed her,

And then rushed over to me.

Detected in me fertile ground

And smiled at the treasure he’d found.

As he messed with my head,

I retreated to bed –

To this day, that’s where I’ll be found.